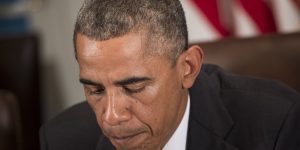 US President Barack Obama pauses while making a statement for the press after a meeting in the Cabinet Room of the White House October 15, 2014 in Washington, DC. Obama canceled campaign and fundraising travel for Democrats to attend the meeting on Ebola after a second case of the disease was contracted inside the United States. AFP PHOTO / Brendan SMIALOWSKI (Photo credit should read BRENDAN SMIALOWSKI/AFP/Getty Images)