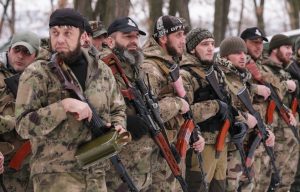 Pro-Russian separatists from the Chechen “Death” battalion stand in a line during a training exercise in the territory controlled by the self-proclaimed Donetsk People’s Republic, eastern Ukraine, December 8, 2014. Chanting “Allahu Akbar” (God is greatest), dozens of armed men in camouflage uniforms from Russia’s republic of Chechnya train in snow in a camp in the rebel-held east Ukraine. They say their “Death” unit fighting Ukrainian forces has 300 people, mostly former state security troops in the mainly-Muslim region where Moscow waged two wars against Islamic insurgents and which is now run by a Kremlin-backed strongman. Picture taken December 8, 2014. REUTERS/Maxim Shemetov (UKRAINE – Tags: POLITICS CIVIL UNREST CONFLICT)